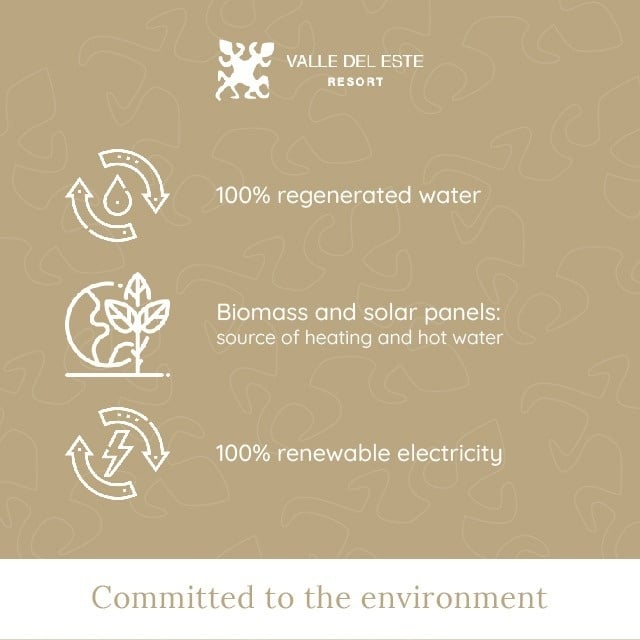 BOOK AT THE BEST PRICE

Since 2021 in Valle del Este we have a croquet field approved by the Spanish Croquet Federation (FEC) and which hosts various official tournaments annually.

Measurements and sense of the game 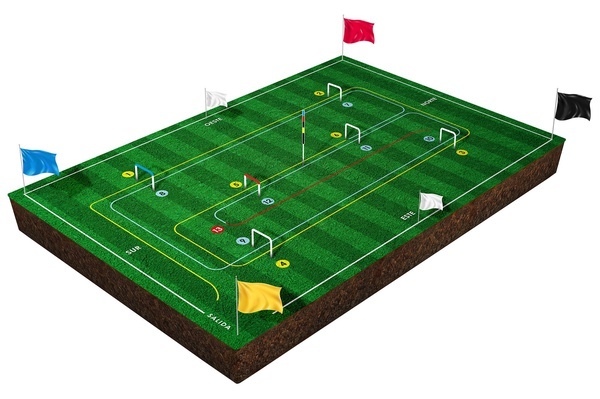 Due to the excellent climate that we enjoy in Vera, you can play croquet 365 days a year.

Whether it is as a hobby or as a competitive sport, we encourage you to try our new facilities.

* In addition, we have exclusive discounts for hotel guests.

WHAT DOES IT CONSIST OF?

Croquet consists of hitting the ball with a mallet and trying to be the first to pass it under the hoop to score a point. Once past the hoop, all players will move on to the next.

We will not only try to be the first to achieve it, but also that our opponent does not do it before, so Strategy! We can also try to deflect your ball.

The team with the most points will win. 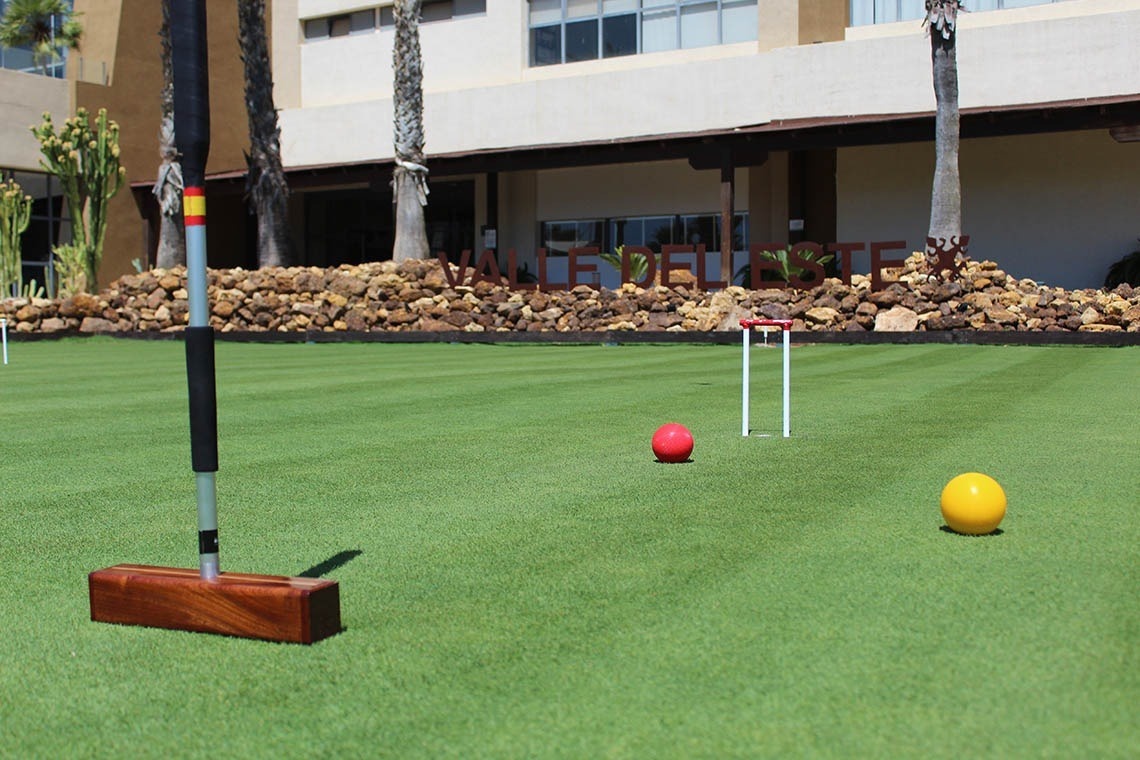 Croquet was born in the 12th century in French Provence (not in England or Ireland as many of us think) as a pastime for the aristocracy. It was in 1830 that it became a sport and, therefore, in its modern version as we know it today. 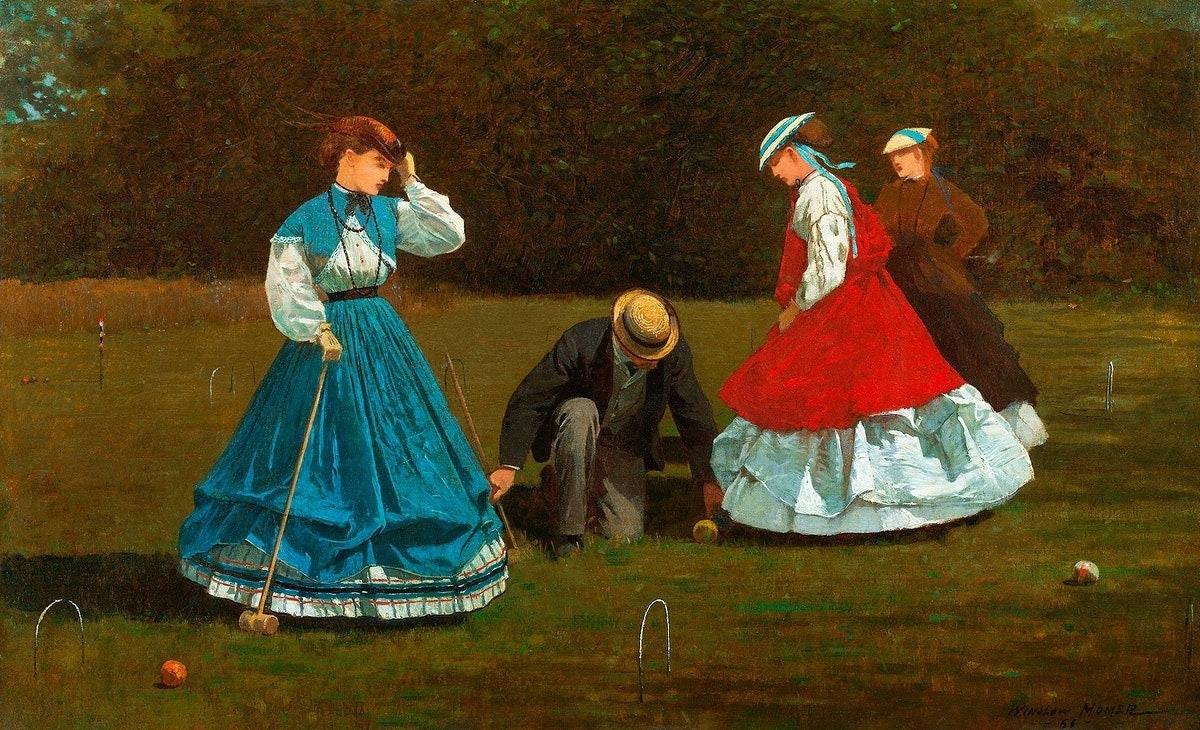 RULES OF USE, RULES OF THE GAME and BASIC FOULS

Limited to people over 16 years of age and mandatory compliance with the dress code.

Click here to know the Rules of use and dress code, the rules of the game and the basic faults. 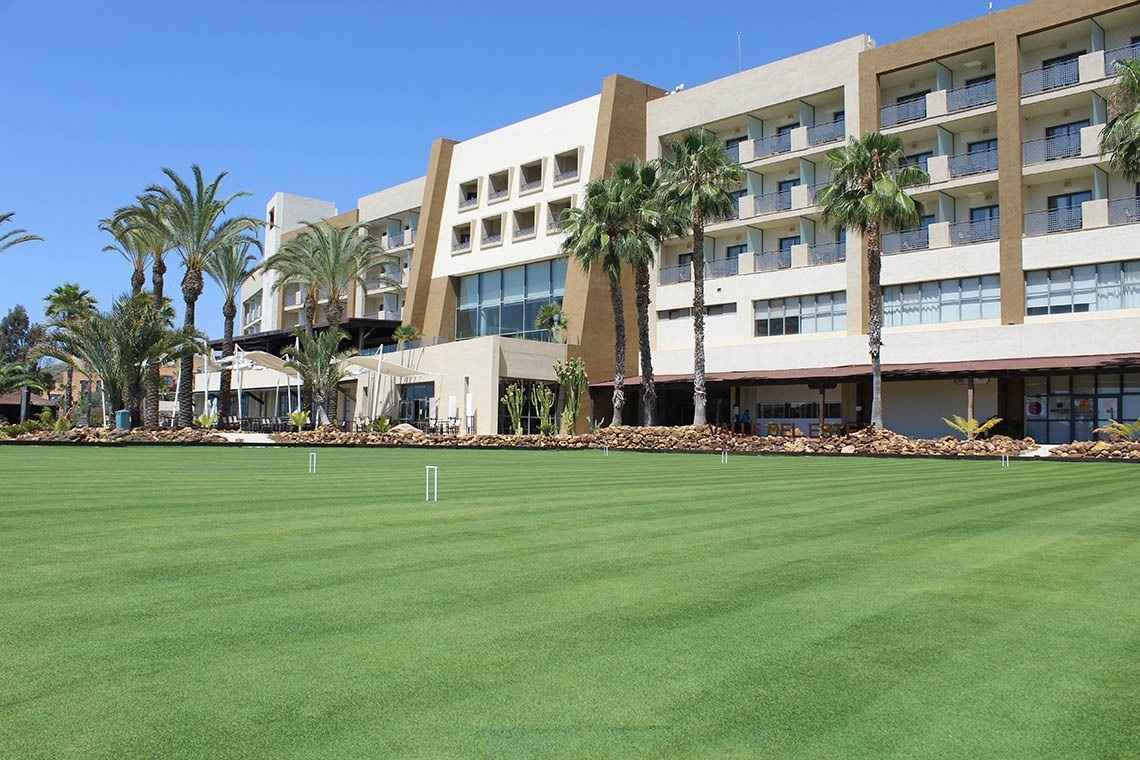 It is played with 4 balls in the following order: blue, red, black and yellow (drawn on the corsair or central stick). The hoops, flags and central pole cannot be moved.

In the case of a second match, the order of the balls will be: green, pink, brown and white. In this case, and once the game has started, the party that is closest to the hoop that both parties want to hole out at simultaneously has preference.

If there are two players, one uses the blue and black balls, and the other the red and yellow. If there are 4 players, each one uses a ball. Each player makes a stroke in order.

Each turn is a single move (a single hit).

The starting order is established with a coin toss. The one who comes out first uses the blue ball and successively the following players the red, black and yellow.

It starts from the corner with a yellow flag.

The game consists of passing the hoop (indicated in the order of the hoops in the diagram). Once a player has passed the hoop, they have a point and all players go to the next hoop, from the place where the balls were before that play, and without having to go through that previous hoop. The player who has won the point plays the ball from the place where it rests after that hit, and after the rest of the players have played, according to the established order of play.

A hoop is passed when no part of the ball protrudes beyond the side of the hoop through which it was entered. If a player hits another player's ball that goes through the hoop, the point goes to the ball that went through the hoop.

If a ball goes out of play, it is placed at the point where it went out, and on the line of play.

If a player accidentally touches his ball, it counts as a turn.

After a turn in which a hoop point has been scored, any ball that has previously passed halfway between that hoop and the next, may be declared “out of play” by the opponent, and is penalized ( sent to either of the two penalty spots (white flags on the sidelines), unless it got there as a result of going through the hoop, being hit by an opponent or hitting another ball earlier in the shot.

The match is won by the team that first gets seven points.

In case of a tie at the end of hoop 12, the tiebreaker is always played from hoop 12 to 13 (hoop 3), which will have to be pocketed from north to south, and starting from the place where the balls have been left when the previous hoop was pocketed.

In any case, the maximum period of time that a match can last is one hour, so the result of the match will be the one obtained at the time of completion of that one-hour period.

The players must respect the rules of etiquette in their clothing, and take care of the field, fixing the damage they cause before continuing the play. Please do not hit the ground or other materials on the croquet lawn with mallets.

During the game, only players and referees may be on the field. Spectators cannot give directions to players.

You cannot talk while a player is making the hit, the rest of the players standing behind and at a certain distance so as not to disturb the player.

No food or drink may be brought into the field, and the use of mobile phones must be avoided so as not to disturb the rest of the players.

If another player's ball is hit with the mallet, or with a different part of the mallet face, or if the player touches a part of his body with the ball when hitting, or if he hits his own ball 2 times (double hit ), or if the ball itself touches the mallet or a part of the player's body after hitting the hoop or center post, or if the player ultimately causes damage to the course to the ground surface or the various flags, hoops or markers, understands that the player has committed a foul, so the offender's turn ends and the opponent can choose between placing the balls where they were previously, or leaving them where they have gone.

If the wrong ball is played or out of turn, the opponent may choose to substitute the balls or leave them where they are, and also choose which of their two balls to continue play with. A hoop made with the wrong ball does not count as a hoop point.


RULES OF USE AND DRESS CODE

The footwear must be sports, golf shoes (except spikes) or croquet specific (it will not be possible to access the course with street shoes, sandals, flip flops, etc.)

The clothing must be polo shirts with a collar, long or short “Chinese” cut pants, ladies may wear sports dresses and skirts (access in tracksuits, jeans, swimsuits, etc. is not allowed).

In competitions the clothing will be rigorous white, except for footwear.

You will not be able to access the field with glasses or food.

The mallet must always be suspended, and not be dragged around the field.

It will be reason for expulsion if the pennants, hoops or any item of furniture is hit with the mallet. 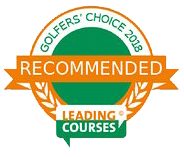 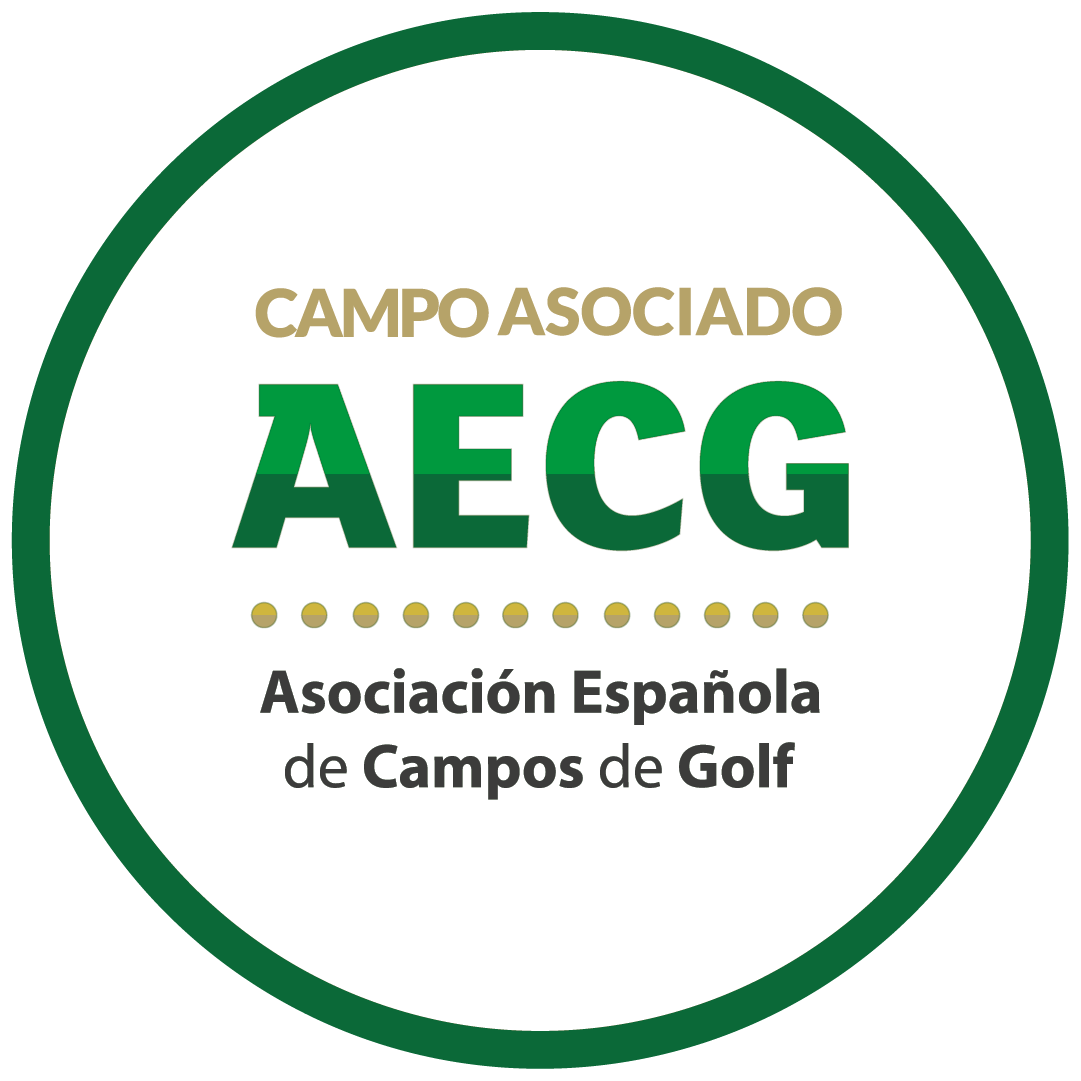 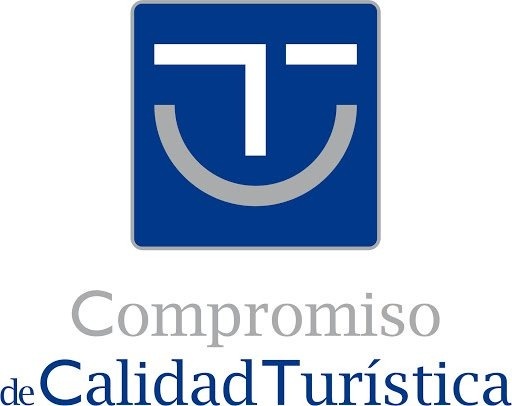 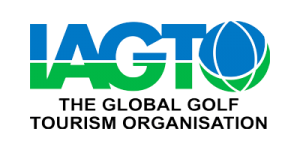 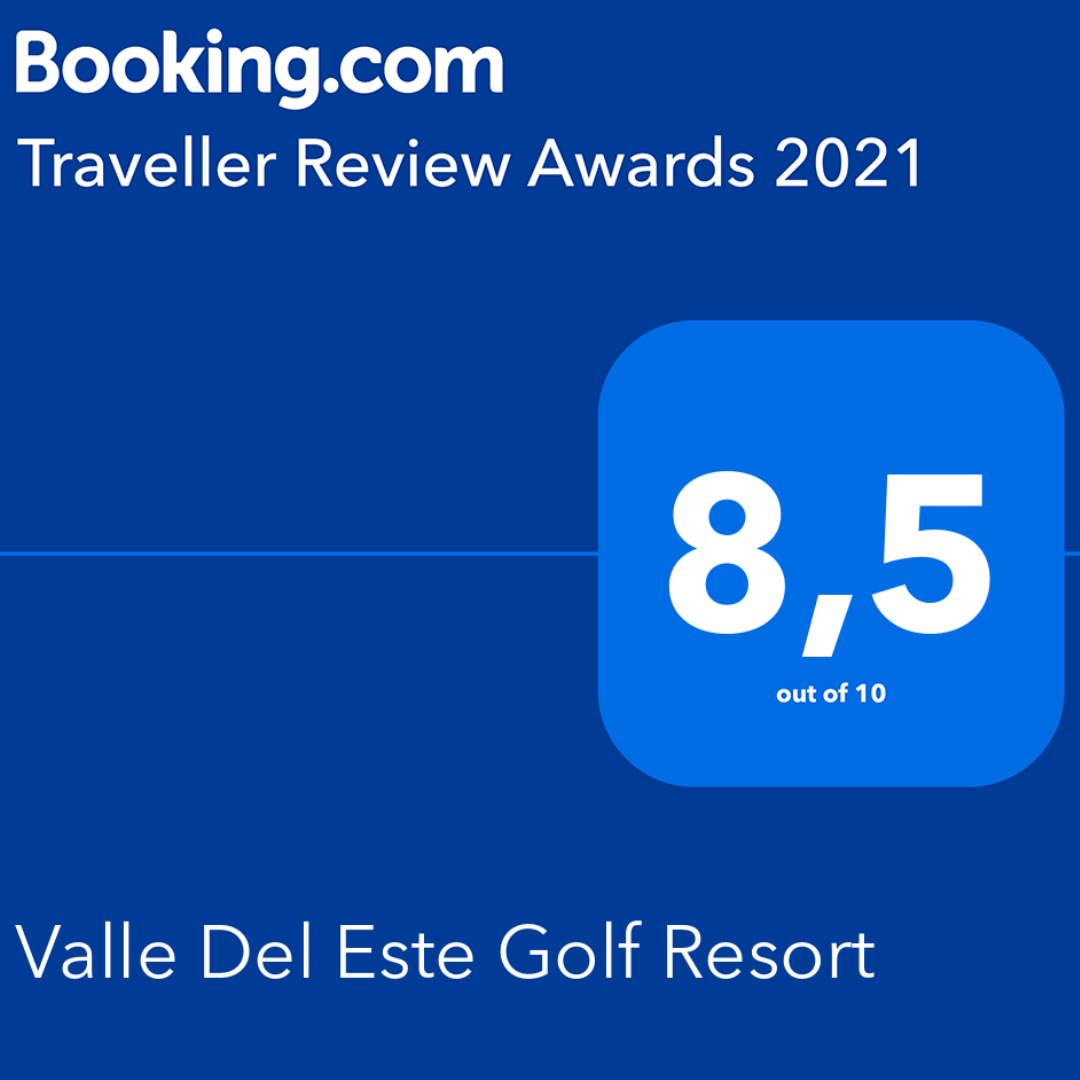